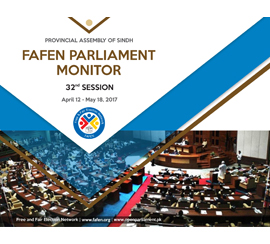 ISLAMABAD, 19 May 2017:  The Provincial Assembly of Sindh passed four bills and adopted thirteen resolutions during 32nd session that comprised 17 sittings held between April 12, 2017 and May 18, 2017. The House did not take up more than half (53%) of the Private Members’ business during the session. The opposition lawmakers protested against the Chair and the government for rejecting their business and barring them from speaking on Points of Order. Nearly 11% duration of the session was consumed in Points of Order that were used to discuss political controversies and governance issues.

On average, 65 (39%) lawmakers including five minority lawmakers attended each sitting. At commencement of each sitting, there were 36 (22%) members present, on average, whereas the number rose to 46 (28%) at the time of adjournment. Each sitting on average started 88 minutes late and lasted two hours and 31 minutes. The longest sitting of the session (15th) continued for three hours and 43 minutes while the shortest (3rd) met for 34 minutes. The cumulative duration of 17 sittings was 42 hours and 56 minutes, of which 61 minutes were consumed in prayer break or suspension due to lawmakers’ protest.

The Parliamentary Leader of PPPP attended entire session (17 sittings) and was followed by the leaders of MQM (16 sittings), PTI (14 sittings) and PML-F nine sittings. The leader of PML-N and NPP remained absent throughout the session.

The Assembly passed four bills including a Private Member’s bill during the session. Moreover, the introduction and consideration of a government bill was deferred. The Sindh Development and Maintenance of Infrastructure Cess Bill, 2017 aimed to authorize Provincial Revenue Department to collect infrastructure cess on goods entering and leaving the province. The Sukkur IBA University Bill, 2017 seeks to grant the Institute of Business Administration (IBA) Sukkur status of the university. The university would provide research and education facilities in the field of business management.

The Assembly’s regular business included 22 resolutions of which six were adopted, two were rejected and three were disposed of due to absence of the concerned lawmakers. The remaining 11 resolutions were left unaddressed. However, the House adopted seven supplementary resolutions as well which were not part of the regular agenda.

The adopted resolution urged the government to take action on illegal encroachment in Karachi and lack of customer care services by Hyderabad Electric Supply Corporation (HESCO); to prohibit ostentatious marriage ceremonies; to implement the rules of the Sindh Private Educational Institutions (Regulation and Control) Ordinance 2001; and to teach Disaster Management as a subject at Secondary and Higher Secondary Schools. The House, through resolutions, demanded resignation of the Prime Minister after announcement of Supreme Court’s verdict on Panama Papers scandal and condemned the political actions of Chairman Pakistan Tehreek-e-Insaf (PTI). It also adopted a resolution asking the Election Commission to revise allocation of reserved seats to political parties in light of current seats. The other resolutions paid tribute to Cricketer Younis Khan for scoring 10,000 runs in Test cricket and Sufi Saint Lal Shahbaz Qalandar on the occasion of his Urs. The House condemned the killings in Karachi on May 12, 2007 and prolonged electricity load shedding in the province.

The lawmakers belonging to PTI, PML-N and MQM moved one Question of Privilege each complaining inappropriate behavior of the government servants with them. The MQM lawmaker withdrew his motion and one motion of PTI lawmaker was rejected by the Chair while a PML-F lawmaker’s motion remained unaddressed.

Four protests and two walkouts were against the Chair whom the opposition lawmakers accused of biasedness against them and their agenda items. The opposition also protested against suspension of Question Hour during third sitting and hasty passage of a government bill. MQM lawmakers staged a protest against the ruling party for trying to influence Election Commission to delay the result of polls in Union Council 9, Sukkur. Entire opposition walked out over government’s refusal to set up a committee to probe into death of a MQM worker under police custody. PML-F and PTI lawmakers also staged protests in the House against bad remarks about their parties’ leaderships. The 28 proposals to amend the Assembly’s Rules of Procedure were also part of the agenda. The proposals were given by MQM lawmakers, however, none of them were addressed.

The House did not hold discussion on any of the seven Adjournment Motions moved by MQM and PTI lawmakers. Four of these were rejected by the House, two were withdrawn by concerned lawmakers and one remained unaddressed. The rejected motions sought debate on outbreak of Chikungunya viral disease, unavailability of free text books to the students, pollution in Karachi and allotments in the Shaheed Benazir Housing Cell on political bases. The remaining motions highlighted the issues regarding non-functional filtration plant in Hyderabad, use of unfair means in intermediate examinations and unregistered factories.

The House took up 34 out of 48 Call Attention Notices (CANs) submitted by lawmakers to draw government’s attention to the issues of public importance. The remaining nine CANs were not taken up due to the absence of movers or the relevant ministers. Eighteen CANs were related to the department of Local Government, eight to Education and Literacy, seven to Health, four to Industries, two to Home Department and one each to departments of Transport, Planning and Development, Public Health Engineering, Services and General Administration, Irrigation, Works and Services, Zakat and Ushr, Finance, and Law. The lawmakers belonging to MQM submitted 25 CANs and were followed by lawmakers of PTI, PML-F, PML-N and PPPP who submitted eight, seven, five and three CANs respectively.

The lawmakers moved 23 Private Motions on various issues of public interest during the session. The House disposed of five motions due to absence of the movers while remaining 18 motions were not taken up. These motions were related to issues of governance, distribution of resources, environment, infrastructure development, health and education.

Lawmakers spoke on 70 Points of Order (POs) during the session, consuming four hour and 36 minutes of the proceedings. As many as 31 lawmakers including 17 members of ruling PPPP expressed their views using the Points of Order. The political and governance matters were amongst the main issues discussed using POs.

The House witnessed presentation of four reports during the reporting period. The Provincial Minister for Parliamentary Affairs presented three Audit Reports of the accounts of the Provincial Government. The Select Committee of the House also presented its report on salaries and allowances of members.

The Question Hour was held in 16 sittings of the session. A total of 101 Starred Questions addressed to 16 departments of the government were listed for answers. The House took up 77 questions (76%) during the proceedings while the members inquired 311 supplementary questions for further elucidation of the answers.