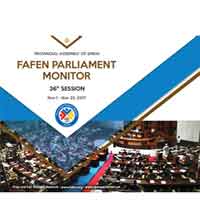 The House addressed 34 Calling Attention Notices (CANs) and debated an Adjournment Motion regarding results of Population and Housing Census, 2017 during the reporting session. As many as 13 private motions for discussions on issues of public importance and eight motions to amend the Rules of Procedure of the Provincial Assembly of Sindh, 2013 were not considered by the House.

The government also introduced the Institute of Animals Health Karachi Bill, 2017 in the House which was referred to the relevant standing committee. Three private members belonging to PPPP introduced the Sindh Prohibition on Manufacture, Promotion and Sale of Gutka and Mainpuri Bill, 2017; the University of Art and Culture, Jamshoro Bill, 2017 and the Pakistan University, Karachi Bill, 2017 which were also referred to the relevant standing committees.

The adopted resolutions recommended the government to lift ban on student unions, appoint lady teachers in primary schools, begin sugarcane crushing in the province of Sindh as soon as possible, grant 90-day maternity leave to working women, encourage establishment of industries, ensure installation of gates at railway-crossings, take steps against unannounced electricity and gas load-shedding in Sukkur, establish Trade Zones in all major cities of Sindh, donate funds for Muslim refugees of Myanmar in Bangladesh and take immediate action against electricity over-billing in Hyderabad.

The House, through resolutions, also recommended the provincial government to take up the issues of zakat fund, recent increase in petroleum prices, dispute among students groups at Quaid-e-Azam University Islamabad and registration of around 13 million women on electoral rolls with the federal government. It also adopted resolutions condemning the National Accountability Bureau (NAB) policies in Sindh, the statement of Pakistan Tehreek-e-Insaaf Leadership for demanding early general elections and the statement of a Federal Minister regarding Kala Bagh Dam.

As many as 34 Call Attention Notices (CANs) were taken up and responded to by the relevant government departments. Among them, twelve were related to Department of Local Government and six to Department of Education and Literacy. The remaining notices were addressed to departments of Health (three), Home, Works & Services and Agriculture (two each), Information, Irrigation, Excise & Taxation, Planning & Development, Prisons, Revenue and Transport (one each).

Six CANs sponsored by MQM lawmakers (five by male and one by female) also appeared on the agenda but were not taken up in the House. Five of these notices related to Department of Education & Literacy and one to Department of Works & Services.

The lawmakers asked 324 supplementary questions, as well. The lawmakers raised seven Points of Order (POs) during the session, consuming 22 minutes of the proceedings.

The lawmakers of MQM, PPPP and PTI tabled 13 Private Motions seeking discussions on various issues of governance education andhealth sectors. However, the House did not take up any of these motions. In addition, eight Motions to Amend the Rules of Procedure and Conduct of Business of the Assembly, sponsored by MQM lawmakers, also remained unaddressed.

Eight incidents of protest and a walkout by lawmakers belonging to the opposition benches were observed during the session. The lawmakers recorded their protest over ignoring Private Members’ agenda, not getting permission from the Chair to raise Points of Order and exchange of harsh remarks between the government and opposition lawmakers.

As many as five lawmakers – MQM four and PPPP one – moved one Question of Privilege each complaining inappropriate behavior of the government servants with them. Three of these questions were referred to the relevant committee, one was withdrawn by the mover and another was disposed of.

The House held a discussion on an Adjournment Motion of PML-F lawmaker regarding Results of Population and Housing Census, 2017. As many as 11 lawmakers participated in the discussion consuming an hour and 51 minutes. The remaining 11 Adjournment Motions remained unaddressed – three were not take up during the respective sitting, five were rejected by the Chair, two were dropped and one was withdrawn by the mover.

According to headcount conducted by FAFEN observers, as many as 58 (35%) lawmakers attended each sitting on an average. As many as 33 (20%) legislators were observed to be present on an average at the outset and 47 (28%) at the adjournment of a sitting. On an average, five minority members also attended each sitting. The average duration of the sitting was observed to be two hours and 28 minutes and the average delay in the commencement of each sitting was an hour and 33 minutes. The second sitting was the longest sitting of the session that continued for three hours and 42 minutes while the eighth sitting was the shortest with 11 minutes of proceedings. The House did not take any break during the sittings; however, the proceedings were stopped for three minutes during every sitting for the Azaan.