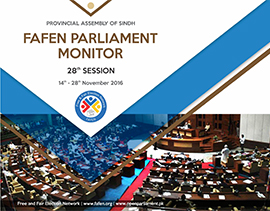 ISLAMABAD: The Provincial Assembly of Sindh passed three bills including the legislation to protect minority rights by imposing restrictions on underage conversion of the religion and adopted nine resolutions on various subjects amid low attendance of lawmakers during its 28th session.

The demand for implementation on laws passed by the assembly regarding violence against women, passage of law to formulate a commission to address issues of minorities and homage to various political and prominent personalities were the main highlights of the session.

The 28th session comprising nine-sitting was summoned on November 14 and prorogued after fourteen days on November 28, 2016. It was marked by low attendance of lawmakers as on average 40 (23%) members were observed to be present at outset and 55 (32%) at adjournment of the sitting. On average, three minority members attended the session. Each sitting, on average started 55 minutes late and lasted two hours and 20 minutes. The first sitting for four hours was the longest sitting while the fourth sitting was the shortest one which met for 24 minutes. A total of eighteen minutes break (one percent of the session time) for Prayers Calls was observed during the session.

The Parliamentary Leader of PTI attended all the nine sittings while the leaders of PML-F attended eight sittings. The leader of PML-N remained absent throughout the session.

Lawmakers tabled 15 resolutions either jointly or individually during the session, of which nine were adopted by the House. Three adopted resolution were tabled by PPPP lawmakers followed by MQM and PML-F (two each) and PML-N and PTI (one each).

The adopted resolutions were about tributes to Sufi Scholar Shah Abdul Latif Bhittai, founder of Sikhism Baba Shree Guru Nanik and martyr of Islam Peer Syed Sibghatullah Shah Rashdi, expressing grief over demise of former PPPP lawmaker Jahangir Badar, addition of Holy Quran in educational curriculum, allocation of jobs for qualified candidates of Combined Competitive Examination, 2013, banning the black stones available in the market and being used for suicide propose, non-increase in electricity tariff of taxes by K-Electric; implementation of laws passed by the assembly on violence against women. However, the House left six resolutions unaddressed that appeared on the list of business of assembly during the session.

As many as 28 out of 30 Call Attention Notices (CANs) appearing on the list of business were taken up and responded to by the government representatives. Seven notices were related to the subject of Local Government, followed by Works and Services, Irrigation, Health and Education & Literacy (three each) and one each on subjects of Agriculture, Parliamentarian Privileges, Environment, Food, Home Department, Human Rights, Land, Social Welfare, Sports, Transport and Wildlife.

The lawmakers raised 56 Starred Questions seeking responses from various government departments, of which 34 were taken up and responded to by the relevant ministers while the remaining 22 Questions remained unaddressed during the session. Thirteen Questions, raised by lawmakers belonging to various political parties were related to Health department followed by Irrigation (12), Fisheries (eight), Excise and Taxation, Transport, Minority Affairs and Food (five each) and three for Local Government department.

Lawmakers raised 21 Points of Order (POs) during five out of nine sittings that consumed an hour and six minutes of the session time. The highest numbers of POs (7) were raised during the first sitting consuming 20 minutes, while two POs consumed four minutes of the proceedings time during eight sittings. In addition, two Matters of Public Importance on shortage of water supply in the province was raised during the third and sixth sittings, respectively.

Two reports of the standing committees on various bills and as many government reports as well as three audit reports on government accounts were presented during the session.

The lawmakers – MQM (six), PTI and PPPP (two each) – moved ten private motions on various governance issues. However, the House left all these motions unaddressed.

Lawmakers belonging to MQM and PTI sponsored two Privilege Motions (PM) of which, MQM-sponsored PM was withdrawn by the mover while a motion by PTI lawmaker was rejected by the House. In addition, members belonging to PTI moved six Adjournment Motions (AMs) during the session and two such motions were sponsored by PML-F lawmakers. Five motions AMs were rejected by the House and two were withdrawn by the movers upon assurance given by relevant ministers on floor of the House. The remaining one motion remained unaddressed due to the absence of its mover.

Four incidents of protest and a walkout by lawmakers were observed during the session that consumed 21 minutes of the proceedings. All incidents except one protest were against the attitude of the Chair for not allowing the members to speak on various parliamentary interventions.