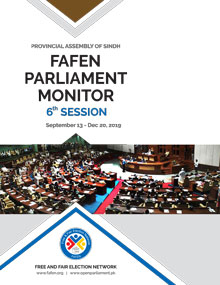 ISLAMABAD, December 21, 2019: The Provincial Assembly of Sindh addressed almost one-third of its scheduled business during sixth session comprising 38 sittings that continued between September 13, 2019, and December 20, 2019, observes Free and Fair Election Network (FAFEN) in its session report.

The low attendance of the lawmakers was marked during the session as an average of 40 lawmakers (24%) were observed to be present at the start and 50 members (29%) percent at the end of each sitting. Each sitting, on average, started an hour and 19 minutes behind the schedule and lasted an hour and 59 minutes.

The regular as well as supplementary agenda of the House during the sixth session comprised 13 government bills and six private members’ bills, 77 resolutions, 110 Call Attention Notices (CANs), 31 amendments to the Rules of Procedure and Conduct of Business, 32 private motions and 301 starred questions. As many as 58 CANs were answered, two Adjournment Motions were admitted for discussion and 123 questions were taken up in the House.