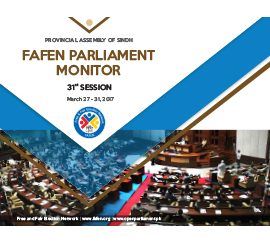 ISLAMABAD, April 2, 2017: The Sindh Assembly witnessed heavy legislative agenda during four-sitting 31st session with the consideration and passage of seven pieces of legislation. The House also formed two committees to review the health policy and revise the salaries of lawmakers.

Among important parliamentary figures, the Chief Minister, the Speaker and the Leader of the Opposition attended all the sittings while the Deputy Speaker remained absent throughout the session. The parliamentary leaders of MQM and PTI attended all four sittings, while the leader of PML-N was absent throughout the session. The long delays in commencement of Assembly sittings continued during this session as well. On average, each sitting started 55 minutes behind its scheduled time.

Long delays continue to haunt start of each sitting

The session also witnessed referral of one resolution to the standing committee and presentation of a report. Meanwhile, the lawmakers asked 26 questions and submitted 10 Call Attention Notices (CANs) during the reporting session. The treasury kept ignoring lawmakers’ Private Motions (PM) on the matters of public importance. More than 80% PMs kept unaddressed. Two Resolutions were rejected by the House while as many were withdrawn by relevant members, and 23 motions to amend the Rules of Procedure as well as six Starred Questions were not taken up for oral answers by the government.

The opposition lawmakers staged a protest and a walkout during the reporting session. They protested and walked out against the Speaker for rejecting private members’ resolutions.