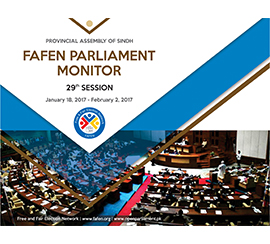 ISLAMABAD: Marked by low attendance of lawmakers, the Provincial Assembly of Sindh passed seven bills, including an important legislative proposal to protect children from underage labor and corporal punishments and adopted 12 resolutions during 12 sittings of the reporting session. The opposition benches tried to raise the issues of governance and law and order on the floor of the House while the government’s less attention towards the agenda sponsored by opposition parties remain the highlights of the session, observes Free and Fair Election Network (FAFEN) while compiling the 29th session report of the Sindh Assembly.

The reporting session was summoned on January 18 and prorogued on February 2, 2017. It was marked by low interest of lawmakers as on average the maximum number of 67 (40%) lawmakers attended each sitting. In addition, 28 (17%) members were observed to be present on average at the outset and 47 (28%) at the adjournment of sitting. On average, four minority members attended the session. Each sitting on average started 55 minutes late and lasted three hours and 11 minutes. The eighth sitting of five hours and 25 minutes was the longest one while the 11th sitting was the shortest one, which met for two hours and three minutes. Additionally, a total of 30 minutes prayer break (one percent of the total session time) was observed during the session.

The Speaker remained absent during the entire session as he was performing the duties of Acting Governor of Sindh. The Deputy Speaker attended the entire sittings and presided over the proceedings for 10 hours and 34 minutes (91%) while the remaining (eight percent) proceedings were chaired by a Member of the Panel of Chairpersons.

The Parliamentary Leaders of PPPP and PTI attended all the 12 sittings while the MQM leader attended 11 sittings, followed by leaders of PML-F and PML-N five sittings each.

Ten bills appeared on the agenda during the entire session, while the assembly gave approval to seven bills, including five Government and two Private Members’ bills. The treasury lawmakers tabled more legislative proposals than their opposition counterparts. Party-wise details of the legislative business indicated eight bills were tabled by PPPP lawmakers while one each by PML-F and MQM lawmakers.

The House adopted as many as 12 resolutions on various matters during the reporting period. Lawmakers belonging to MQM tabled five resolutions individually, followed by PML-N and PTI (two each), PPPP and PML-F (one each) while one resolution was jointly tabled by a PML-F and PPPP lawmaker.

The adopted resolutions were related to launching of the awareness campaigns for registration of women in the forthcoming census, paying homage to GM Syed and Fazil Rahu for their political struggle, controlling illegal manufacture, sale, purchase and smuggling of weapons, issuance of official order for immediate installation of fare meters in rickshaws and taxis in the province, urging the government to take strict action against child begging and child labour, calling for stoppage of sea intrusion along the coastline of Sindh,  making Polio Vaccination Card mandatory for primary and secondary school admissions in government and private institutions, demanding measures to launch awareness campaigns to fight Dengue fever, urging the provincial government to approach Pakistan Cricket Board (PCB) for selection of cricketers on merit, initiating Model Projects of Solar Energy to deal with electricity load-shedding, calling for devising policies on youth’s education and urging the government to contact Federal government for provision of 80 percent subsidy on electricity bills for farmers using tube wells for agriculture purposes.

As many as 31 out of 40 Call Attention Notices (CANs) appearing on the list of business were taken up and responded to by the government representatives. Fifteen CANs were related to the subject of Local Government, followed by Home (5), Education (3), Transport and Health (two each), and one each on Works & Services, Excise and Taxation, Supply and Prices and Prisons department. The remaining nine CANs were not taken up due to the absence of movers or the relevant ministers.

The lawmakers raised 86 Starred Questions, seeking responses from various government departments, among them 58 were taken up and responded to by the relevant ministers while the remaining 28 questions remained unaddressed. Sixteen questions, raised by the lawmakers belonging to various political parties were related to the Transport department, followed by Excise & Taxation (10), Wildlife, Works & Services and Health (8 each), Planning & Development         (7), Anti-Corruption (6), Livestock, Zakat & Ushr, Prisons and Food    (5 each) and three dealt with Social Welfare department. In addition, lawmakers asked 268 supplementary questions, as well.

Lawmakers raised 15 Points of Order (POs) during five sittings, consuming an hour and 11 minutes of the session time. The highest number of POs (5) were raised during the third sitting that ate 29 minutes of the proceedings, while one Point of Order consumed two minutes during the 12th and last sitting of the reporting session.

Five reports, including three audit reports, a monitoring report on the implementation of National Finance Commission (NFC) Award and a report of the standing committee on the Sindh Prohibition of Corporal Punishment Bill, 2015 were presented during the session.

The lawmakers belonging to MQM tabled 10 private motions on various issues related to governance during fifth and 10th sittings.  However, the House left all these motions unaddressed. In addition, 23 motions to amend the Rules of Procedure and Conduct of Business of the Assembly sponsored by MQM lawmakers also remained unaddressed.

Legislators belonging to PML-F (three) and PTI (one) moved four Adjournment Motions (AMs) during the session, which were rejected by the House. In addition, a treasury party lawmaker withdrew his Privilege Motion (PM) on the assurance of the concerned minister on the floor of the House during the ninth sitting.

Twelve incidents of protest and a walkout by lawmakers, mostly belonging to the opposition benches, were observed during the session that consumed three hours and 36 minutes of the proceedings. Seven incidents of protests and a walkout were against the Chair for not allowing the lawmakers to speak on various parliamentary interventions while the remaining protests were against the exchange of unpleasant remarks among the lawmakers.