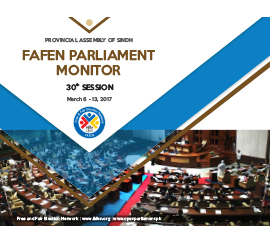 ISLAMABAD: Marked by low interest of lawmakers, the Provincial Assembly of Sindh adopted six resolutions on various issues of public importance and passed four bills, including an important legislative proposal to ensure citizens access to public information during six sittings of the 30th session, observes Free and Fair Election Network (FAFEN) in a report.

Main highlights of the reporting session include adoption of four resolutions by the House to pay tributes to Pakistani women on the International Women’s Day, constituting a committee to probe the alleged overbilling by K-Electric in Sindh and the protests by opposition parties over ignoring their agenda during the sittings held between March 6 and March 13, 2017.

The Provincial Assembly passed four treasury backed legislative proposals that appeared on the agenda during the entire session. Three among the passed bills were new legislations related to Food, Livestock and Right to Information while one bill sought amendments to the existing Local Government Law.

The House adopted as many as six out of nine resolutions on various matters of public importance during the reporting period. In addition, two resolutions were rejected while one was withdrawn by the mover. Lawmakers belonging to PTI tabled three resolutions individually, followed by MQM and PML-F (two each) and one each by PML-N and PTI lawmakers.

Four out of six adopted resolutions paid tributes to women of Pakistan on the International Women’s Day while one resolution each was related to the K-Electric billing and metering issue and dumping of sewerage water into the sea.

As many as 20 Call Attention Notices (CANs) were taken up and responded to by the relevant government representatives. Among them, eight were related to the Departments of Local Government, followed by Home (4), Health and Education & Literacy (two each), and one each to that of Women Development, Services and General Administration (S&GAD), Planning and Development and Land Utilization. Male lawmakers sponsored 13 (65%) notices while women members initiated seven notices (35%) seeking attention of the ministers on various matters of public importance. MQM lawmakers took the lead in sponsoring CANs by submitting 12 notices, followed by PTI (four), PPPP (two) and one each by PML-F and PML-N.

The Members of the Provincial Assembly also raised 37 Starred Questions, seeking responses from various government departments. Among these, 22 were taken up and responded to by the relevant ministers while the remaining 15 questions remained unaddressed. Ten questions, raised by the lawmakers belonging to various political parties, sought reply from Zaqat and Ushr Department, followed by Health (8), Forest, Culture & Tourism and Irrigation (five each) and four from Youth Affairs & Sports. The lawmakers asked 123 Supplementary Questions, as well.

The lawmakers raised 20 Points of Order (POs) during four sittings, consuming two hours and 21 minutes of the session time. The highest number of POs (10) were raised during the first sitting that consumed an hour and 25 minutes of the proceedings, while one Point of Order took five minutes of the second last (5th) sitting of the 30th session.

Two reports of the Standing Committees on the Sindh Food Authority Bill, 2016 and the Sindh Livestock Breeding Bill, 2016 while one report of the Select Committee on the Sindh Transparency and Right to Information Bill, 2016 were presented in the House during the session.

The lawmakers of MQM and PTI tabled five Private Motions on various issues of governance during the second sitting, however, the House did not address any of these motions. In addition, 23 Motions to Amend the Rules of Procedure and Conduct of Business of the Assembly sponsored by MQM lawmakers also remained unaddressed.

Eleven incidents of protest and a walkout by lawmakers, mostly belonging to the opposition benches, were observed during the session that consumed an hour and 42 minutes of the proceedings. These uproars were on the issues of ignoring Private Members’ agenda, not getting permission from Chair to raise Point of Orders and exchange of unwarranted remarks between the government and opposition lawmakers.

The reporting session was, however, marked by low attendance of lawmakers as on average a maximum of 70 (42%) lawmakers attended each sitting. In addition, 38 (23%) legislators were observed to be present on average at the outset and 44 (26%) at the adjournment of sitting. On average, six minority members attended the session. Each sitting on average started 65 minutes behind the schedule and lasted for two hours and 51 minutes. The third sitting consuming three hours and 33 minutes was observed to be the longest one while the fifth sitting the shortest, which remained in session for two hours and two minutes. Additionally, 24 minutes brakes, including three-minute prayer break (two percent of the total session time) were observed during the session.