Skin Diseases Up 15% in July 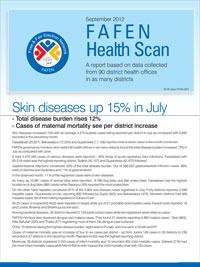 ISLAMABAD, October 1, 2012: Skin diseases increased 15% with average 3,275 scabies cases being reported per district in July as compared with 2,842 recorded in the preceding month, says a Free and Fair Election Network (FAFEN) report.

Faisalabad (25,827), Bahawalpur (12,254) and Gujranwala (11,158) had the most scabies cases in the observed month during which FAFEN governance monitors visited 90 health offices in as many districts across the country.  The monitors found the total disease burden had increased 12% in July as compared with June.

A total 2,470,345 cases of various diseases were reported – 40% those of acute reparatory tract infections. Faisalabad with 93,219 cases was the highest reporting district. Sialkot (45,107) and Gujranwala (42,472) followed. Gastrointestinal infections constituted 23% of the total disease burden. Out of 580,522 gastrointestinal infection cases, 88% were of diarrhea and dysentery and 11% of gastroenteritis. In the observed month, 11 % registered cases were of skin diseases.

As many as 10,681 cases of animal bites were reported – 9,786 dog bites and 895 snake bites. Faisalabad had the highest incidence of dog bites (885 cases) while Rajanpur (93) reported the most snake bites. On the other hand hepatitis constituted 91% of the 3,954 viral disease cases registered in July. Forty districts reported 3,599 hepatitis cases -Gujranwala on top, reporting 692 followed by Gujrat (625) and Bahawalpur (470). Nineteen districts had 309 measles cases, 60 of them being registered in Karachi East.

All 25 cases of suspected AIDS were reported in Gujrat while out of 21 probable poliomyelitis cases Karachi East reported 18 and Loralai, Bhakkar and Sheikhupura one each. Among bacterial diseases, 32 districts reported 2,103 tuberculosis cases while two registered seven tetanus cases.

FAFEN monitors also observed dengue and malaria cases. They found 31 districts reporting 4,992 malaria cases – Tank (863), Killa Saifullah (520) and Thatta (471) registering most of them. No dengue case surfaced. Of the 10 districts having the highest disease burden, eight were in Punjab, and one each in Sindh and KP.