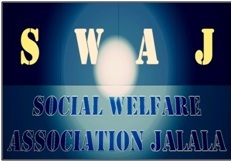 Social Welfare Association Jalala  (SWAJ) was established in 1995 by a set of highly motivated, socially committed and like-minded individuals. It was formally registered under Social Welfare Act 1961 in 1995 as a non-government and non-profit organization. In the face of prevailing feudal political structure and traditional mindset peoples were feeling straitjacketed and a collective voice in terms of organized collective forum was need of the hour. Establishment of SWAJ was a long awaited desire and realization of the people of the Mardan to address the issue of Human Rights and it emerged as a catalyst in mobilizing and organizing the rural people for asserting their basic rights to expression, participation in politics and availing a rightful way to justice.

SWAJ started its activities in 1995 on mutual help basis by mobilizing and organizing the masses for bringing about a change in the status quo environment of political exploitation, gender-Discrimination and violation of children and women rights.

At present, SWAJ is a district level rights based advocacy, relief and development organization. SWAJ has operational setups and programmes in Mardan, Nowshehra, Swabi and Mardan districts of KP.

A just and democratic society based on the principles of equality, fairness, justice and interdependence.”

Create a democratic and peaceful society based on the principles of equality, transparency and justice through social mobilization, knowledge and capacity development and advocating the rights of marginalized segments, especially children and women.