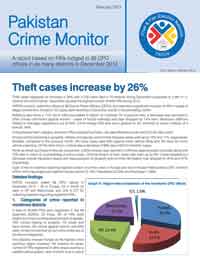 Theft cases registered an increase of 26% with 3,103 cases filed in 75 districts during December compared to 2,467 in 71 districts the month before. December reported the highest number of theft FIRs during 2012. FAFEN monitors visited the offices of 98 District Police Officers (DPOs) and reported a significant increase of 49% in cases of illegal confinement. A total of 122 cases were recorded in December and 82 in the preceding month. Statistics also show a 17% rise in offences related to attack on modesty. On a positive note, a decrease was recorded in other crimes committed against women – cases of forced marriage and rape dropped by 14% each.

Moreover, offences related to marriage registered a cut of 54%, honor killings 23% and word, gesture or act intended to insult modesty of a woman, 94%. In the physical harm category, terrorism FIRs increased two folds – 42 cases filed this month and 20 in the last month. Among crimes pertaining to property, robbery and dacoity, and criminal trespass cases went up by 10% and 11%, respectively. Similarly, compared to the previous month, 3% more cases were filed against motor vehicle lifting and 4% more for motor vehicle snatching.

On the other hand, in December a decrease of 98% was noted for extortion cases. As far as threat and fraud crimes are concerned, a 30% increase was reported in offences against public tranquility along with 10% hike in cases of counterfeiting currency notes. Criminal breach of trust cases also went up by 8%. Cases registering a decrease include fraudulent deeds and dispossession of property and criminal intimidation that dropped by 97% and 31%, respectively. Eight of the ten districts reporting highest number of crimes were in Punjab and two in Khyber Pakhtunkhwa (KP). Districts where crime reportage was highest include Lahore (5,102), Faisalabad (2,294) and Peshawar (1,665).