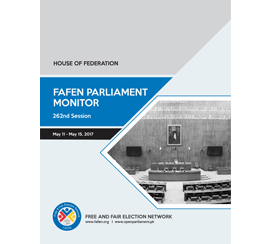 ISLAMABAD, May 16, 2017: The Upper House of Parliament passed six government bills and adopted three resolutions during opposition-requisitioned 262nd session held between May 11, 2017 and May 15, 2017.

The requisitioned session held discussion on various issues including lynching of Mashal Khan; disallowing leaders of a political party from holding of Press Conference at Press Information Department (PID); Dawn Leaks and aftermath of its inquiry; investigation into Panama case and constitution of JIT; suicide attack on the convoy of Deputy Chairman Senate; interference of Governor Sindh in political matters and delay in tracing whereabouts of close aid of former President.

A bill – the Right of Access to Information Bill, 2017 – was referred to relevant committee after introduction while the government withdrew the Cost and Management Accountants (Amendment) Bill, 2017.

On average, 21 (20% of the total membership – 104) lawmakers were present at the start and 17 (16%) at the end of each sitting.  A maximum of 63 members, on average, attended every sitting of the session, including three minority lawmakers.

Each sitting, on average, started five minutes late and continued for four hours and 40  minutes. The Prime Minister did not attend any of the sittings. Sub-rule (2A) of Rule 61 of the Rules of Procedure and Conduct of Business in the Senate states that the Chief Executive shall attend the Prime Minister’s Zero Hour (last hour of the sitting) at least once a week when the Senate is in session.

The House also held discussions on various Motions under Rule 218.  Nineteen lawmakers participated in debate on incident of lynching Mashal Khan; seven lawmakers spoke on disallowing leaders of a political party from holding of Press Conference at Press Information Department (PID); 13 lawmakers took part in discussion on Dawn Leaks; 18 lawmakers debated investigations into Panama case and constitution of JIT while 11 lawmakers expressed their views on matters of political activities of Governor Sindh, agenda of Council of Common Interests’ meeting, irrigation and water supply and missing friend of former President . These discussions consumed  52% of the Session’s time.

On the directions of the Chairman Senate, the government informed the House of its position on the recent hostile statements by Iran; tension on Pak-Afghan Border at Chamman; statement made by the Chinese Ambassador in India regarding the changing of name of CPEC; decision of Indian to approach International Court of Justice on issue of Kalbooshan Yadev and upcoming visit of the Prime Minister to attend the Arab Summit. Lawmakers spoke on four Points of Public Importance for 12 minutes.