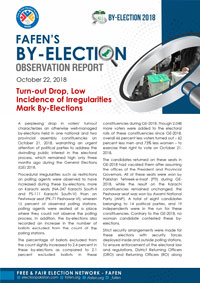 ISLAMABAD, October 22, 2018: A perplexing drop in voters’ turnout characterizes an otherwise well-managed by-elections held in one national and two provincial assembly constituencies on October 21, 2018, warranting an urgent attention of political parties to address the dwindling public interest in the electoral process, which remained high only three months ago during the General Elections (GE) 2018.

Procedural irregularities such as restrictions on polling agents were observed to have increased during these by-elections, more on Karachi seats (NA-247 Karachi South-II and PS-111 Karachi South-V) than on Peshawar seat (PK-71 Peshawar VI), wherein 15 percent of observed polling stations, polling agents were seated at a place where they could not observe the polling process. In addition, the by-elections also recorded an increase in the number of ballots excluded from the count at the polling stations.

The percentage of ballots excluded from the count slightly increased to 2.4 percent in these by-elections as compared to 2.1 percent excluded ballots in these constituencies during GE-2018. Though 2,048 more voters were added to the electoral rolls of these constituencies since GE-2018, overall 66 percent less voters turned out – 62 percent less men and 73% less women – to exercise their right to vote on October 21, 2018.

The candidates returned on these seats in GE-2018 had vacated them after assuming the offices of the President and Provincial Governors. All of these seats were won by Pakistan Tehreek-e-Insaf (PTI) during GE-2018, while the result on the Karachi constituencies remained unchanged, the Peshawar seat was won by Awami National Party (ANP). A total of eight candidates belonging to 14 political parties, and 19 independents were in the run for these constituencies. Contrary to the GE-2018, no woman candidate contested these by-elections.

Strict security arrangements were made for these elections with security forces deployed inside and outside polling stations. To ensure enforcement of the electoral law and regulations, District Returning Officers (DRO) and Returning Officers (RO) along with Army officials were given magisterial powers. The designated army personnel were authorized to exercise power of Magistrate First Class authority under Article 220 and 245 of the Constitution, Section 4 and 5 of Anti-Terrorism Act, 1997 (as amended) and Section 5 (read with Section 193 of the Elections Act 2017).

The Election Day had followed a lackluster campaign with little interest by major political parties. Tehreek-e-Labbaik Pakistan (TLP), Muttahida Majlis-e-Amal (MMA) and Pakistan Muslim League Nawaz (PML-N) had been the runner-up in NA-247, PS-111 and PK-71, respectively, during GE-2018 but they did not nominate any candidate for these constituencies during the by-elections.

FAFEN deployed 101 election-day observers, including 72 men and 29 women, to observe the voting and counting process at 320 polling stations in one National Assembly (NA) and two Provincial Assemblies (PA) constituencies. This report is based on the observations received on election-day from 162 polling stations reported by FAFEN observers using an indigenously designed Election Information Management System (EIMS) comprising of mobile- and web-based applications.