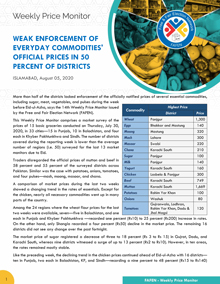 ISLAMABAD, August 05, 2020: More than half of the districts lacked enforcement of the officially notified prices of several essential commodities, including sugar, meat, vegetables, and pulses during the week before Eid-ul-Azha, says the 14th Weekly Price Monitor issued by the Free and Fair Election Network (FAFEN).

This Weekly Price Monitor comprises a market survey of the prices of 15 basic groceries conducted on Thursday, July 30, 2020, in 33 cities—15 in Punjab, 10 in Balochistan, and four each in Khyber Pakhtunkhwa and Sindh. The number of districts covered during the reporting week is lower than the average number of regions (i.e. 50) surveyed for the last 13 market monitors due to Eid.

Traders disregarded the official prices of mutton and beef in 58 percent and 55 percent of the surveyed districts across Pakistan. Similar was the case with potatoes, onions, tomatoes, and four pulses—mash, moong, masoor, and chana.

A comparison of market prices during the last two weeks showed a changing trend in the rates of essentials. Except for the chicken, nearly all necessary commodities went up in many parts of the country.

Among the 24 regions where the wheat flour prices for the last two weeks were available, seven—five in Balochistan, and one each in Punjab and Khyber Pakhtunkhwa —recorded one percent (Rs10) to 25 percent (Rs200) increase in rates. On the other hand, only Shangla recorded a four percent (Rs50) decline in the market price. The remaining 16 districts did not see any change over the past fortnight.

The market price of sugar registered a decrease of three to 18 percent (Rs 3 to Rs 15) in Gujrat, Dadu, and Karachi South, whereas nine districts witnessed a surge of up to 13 percent (Rs2 to Rs10). However, in ten areas, the rates remained mostly stable.

Like the preceding week, the declining trend in the chicken prices continued ahead of Eid-ul-Azha with 16 districts—ten in Punjab, two each in Balochistan, KP, and Sindh—recording a nine percent to 48 percent (Rs15 to Rs140) decrease in rates. On the other hand, only two districts, Suhbatpur and Muzaffargarh, saw a slight hike with the highest of up to four percent (Rs4 to Rs10). However, in seven regions, the poultry prices remained stable.

Among vegetables, the market price of potatoes remained stable in 16 districts but registered an up to 50 percent (Rs5 to Rs30) increase in eight regions, four in Punjab, three in Balochistan and one in KP. A three percent (Rs2) to 25 percent (Rs20) drop was noted in five other regions—four in Punjab and one in KP. Similarly, the onion prices increased by seven percent (Rs2) to 25 percent (Rs10) in 12 areas—seven in Punjab, four in Balochistan, and one in KP. On the other hand, five districts recorded a decrease (Rs3 to Rs44), and 12 districts saw no change. The tomatoes’ prices went up in most regions with at least three areas, including Lodhran, Rahim Yar Khan, and Washuk, reporting a double or more increase in the market prices. The rates of tomatoes climbed to three digits over the past week.

The officially notified price lists of essential commodities were unavailable in various parts of the country during the reporting week. The official rates of 20-kilogram wheat flour bags were not available in around 45 percent of the surveyed cities—20 percent in Punjab, 40 percent in Balochistan, and 100 percent in KP and Sindh.

The official rates of four pulses—moong, masoor, mash, and chana—were generally available in KP, Punjab, and Sindh. However, more than half of the markets in surveyed cities of Balochistan did not display the official prices of mash and masoor while 40 percent did not display daal chana prices and 20 percent daal moong rates. At the same time, milk and yogurt prices were not publicly obtainable in 18 percent and 30 percent areas, respectively.

Moreover, mutton and beef prices were missing in 12 percent of the districts, mostly in KP and Sindh. The official price lists of regular vegetables—potatoes, onions, and tomatoes—were inaccessible in around six to nine percent of the Balochistan markets while elsewhere they were publicly available.

The weak enforcement of the official prices of vegetables, pulses, and meat continued during the reporting week. Daal moong was overpriced in 64 percent of the surveyed districts, masoor (55 percent), mash (48 percent), and chana (52 percent) of the areas. These four pulses went Rs108 to Rs163 above the official prices. The highest difference in wholesale prices and the official rates was in Karachi South and Swabi. Although the pulses’ overpricing was common across provinces, it was most notable in Sindh, where all of the markets sold the pulses at rates higher than the official prices.

Potatoes, onions, and tomatoes were overpriced in 55 percent, 52 percent, and 58 percent districts, respectively. The tomatoes rate went Rs110 higher than the notified price in Jhal Magsi, while potatoes and onions were sold Rs60 and Rs30 above the announced prices in Panjgur.

In the meat category, beef and mutton (average quality with bone) were overpriced in 55 percent and 58 percent of the surveyed districts, and chicken in 33 percent of areas. Mutton, beef, and chicken were sold at Rs929, Rs449, and Rs100, respectively, above the official rates. The highest difference in the market and the official prices of mutton and beef was in Karachi South and of chicken in Panjgur.

The market rates of eggs per dozen were above the officially notified prices in 24 percent districts. At the same time, the rates of milk and yogurt were higher than the official ones in 45 percent of the surveyed areas. 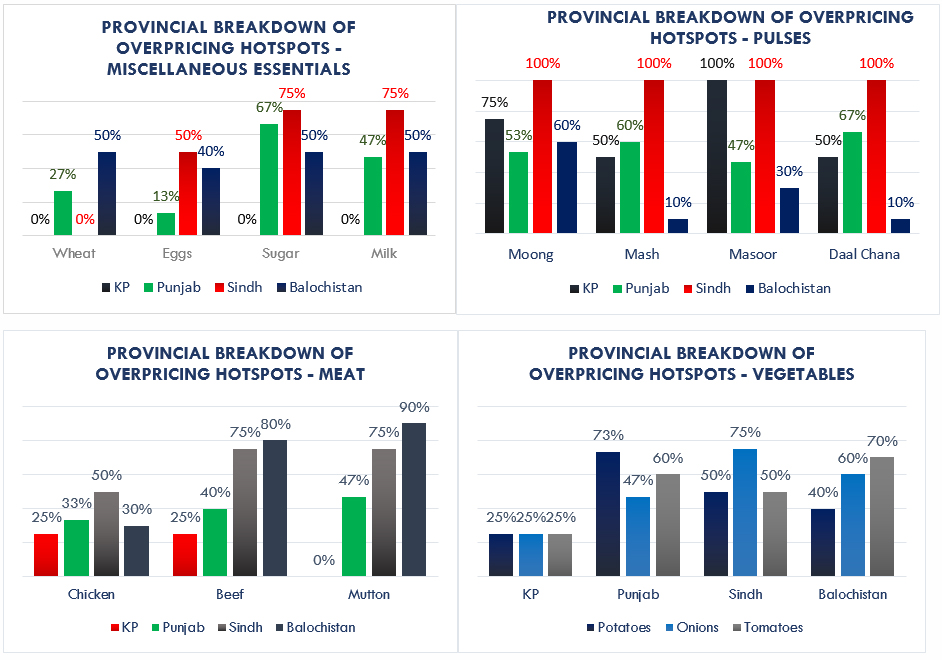