Women contribute 38% of Parliamentary Agenda during 2016-17 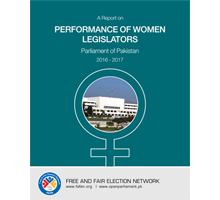 ISLAMABAD, March 8, 2017: Women contributed more than 38% agenda to parliamentary business during 2016-2017, says Free and Fair Election Network (FAFEN) in a report on the performance of women parliamentarians issued on the eve of the International Women’s Day.

During this period, a total of 4,132 agenda items were included on the Orders of the Day – 2,123 in the National Assembly and 2,009 in the Senate.  The percentage of women’s contribution to the parliamentary business is remarkably high in the National Assembly where nearly two thirds (62%) business was originated by women individually and three percent in collaboration with their male colleagues.  In the Senate, women sponsored 13 percent parliamentary business individually and two percent jointly.