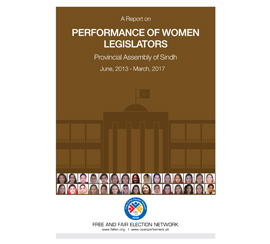 KARACHI, March 28, 2017: The contribution of women lawmakers in enriching the agenda of the Sindh Assembly is not less than the performance of their female colleagues in other provincial assemblies of the country, as they contributed more than 50 percent of the agenda on the floor of the House during the last three and a half years, says a press statement issued on Tuesday.

Free and Fair Election Network (FAFEN) released a report on the performance of Sindh Assembly’s Women lawmakers whose representation in the Provincial Assembly is considerably low as compared to their population in the country. The ceremony was arranged by Pakistan Press Foundation with the support of Trust for Democratic Education and Accountability and the UKaid.

Mehnaz Rehman, Resident Director Aurat Foundation, was the Guest of Honor who presented shields to the women lawmakers in recognition of their remarkbale services to the Assembly. Meanwhile other guest speakers included FAFEN Executive Council members Mohammad Yaqub, Younus Bandhani, and women lawmakers belonging to PPPP, MQM, PML-F and PML-N.

There are only 30 women legislators in the 168-member Sindh Assembly. Their representation in the government is weaker, as there is only one woman minister in the provincial cabinet of 19 members. However, despite their less numerical strength, the women perform equally well or in some instances better than their male lawmakers.

During last 30 sessions held between June 2013 and March 2017, women contributed 50% agenda on their own and eight percent in collaboration with their male colleagues. Their contribution to the oversight agenda i.e. Questions, Private Motions and Adjournment Motions was far greater than male lawmakers whereas their share to other agenda, including legislation and resolutions was also proportionate to their representation in the House.

The agenda initiated by women related to the sectors like governance, education, health and social welfare. Besides these, women lawmakers were also inclined to raise the issues of their gender in the Assembly. They highlighted the matters related to women workers’ rights and violence against women.

The Assembly also took legislative action on several women-specific issues. Much of women-specific legislation was done in the backdrop of devolution of women development subject to the provinces under Eighteenth Constitutional Amendment. The Assembly approved the law for setting up Provincial Commission on Status of Women which works for the betterment of women folk in the province. Moreover, it legislated for prohibition of child marriages and protection of the rights of women workers in factories and other workplaces including their entitlement to maternity leaves. The Assembly also passed eight resolutions expressing its opinion on women-related subjects. It paid respect to the services of Benazir Bhutto, Sharmeen Obaid Chinoy and Malala Yousafzai, recommended establishment of Commission on Status of Women and Women Caucus as well as urged the government to take action for women welfare in various areas.