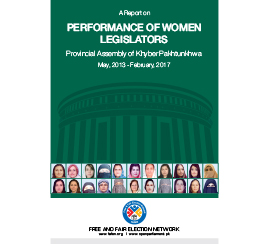 PESHAWAR, March 9, 2017: Despite less in number, women legislators performed better by contributing more to the agenda items than their male counterparts in the Khyber Pakhtunkhwa Assembly, observes Free and Fair Election Network (FAFEN) in a report released on the performance of women legislators observed between June 2013 and February 2017.

A ceremony was arranged at the provincial capital of Khyber Pakhtunkhwa on Thursday to pay tributes to women legislators for their remarkable contribution in enriching the agenda of the House. Deputy Speaker Khyber Pakhtunkhwa Assembly Dr. Meher Taj Roghani was the Guest of Honour, who presented shields to women lawmakers on behalf of Trust for Democratic Education and Accountability – Free and Fair Election Network (TDEA-FAFEN). The ceremony was the continuation of events being held in the provincial capitals to honor women lawmakers for their parliamentary services and also coincided with the International Women’s Day.

Deputy Speaker Dr. Meher Taj Roghani applauded the efforts of women lawmakers in raising women issues in the Assembly and playing their role in the empowerment of the down-trodden despite severe challenges. She said as citizens, women have to fight for their equal rights. She said the importance of women legislators came to fore during the elections of Senate of Pakistan.

TDEA-FAFEN’s former Chairperson and Executive Director of Paiman Alumni Trust Ms. Mossarat Qadeem urged the women lawmakers to work in unison and enhance the role of women in political and electoral processes. She commended the services of women legislators despite their considerably low representation in the Assembly. She urged the women legislators to develop linkages with the community to serve even better.

TDEA-FAFEN Chief Executive Officer Mr. Shahid Fiaz gave the overview of FAFEN’s work and its achievements in the areas of electoral and parliamentary reforms. He paid special tributes to Aurat Foundation’s founder late Nigar Ahmed for her services for the uplift of women.

They also represented public issues and aspirations through resolutions. The women sponsored 46% of the resolutions brought before the House. Similarly, they also contributed to the legislation by sponsoring six out of 17 Private Members’ bills.

The Assembly as an institution also responded to some of the women issues by enacting relevant legislation or making recommendations to the government through resolutions. The Lady Health Workers program was regularized while the laws were put in place to protect working women’s rights and promote breast-feeding. The Assembly also set up institutional mechanism to provide for welfare of women in general and widowed women in particular.

The Assembly also adopted eight women-specific resolutions including resolutions condemning violence against women and encouraging their participation in the political process. The lawmakers sought establishment of Women Parliamentary Caucus in Khyber Pakhtunkhwa Assembly and Women Development Department in the government. They also raised the issue of Dr. Afia Siddiqui’s internment in the United States and demanded the government to take steps to ensure her return.