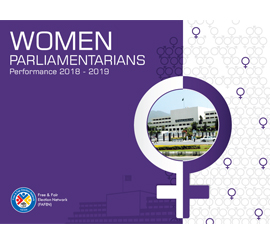 ISLAMABAD, March 8, 2019: Women parliamentarians maintained a track record of consistently surpassing reasonable performance expectations during the year 2018-2019 by making remarkable contributions to setting the agenda for parliamentary business, and sustaining spirited deliberations on a range of pressing matters. This has been observed in a report released by Free and Fair Election Network (FAFEN) on the occasion of International Women’s Day.

Female lawmakers constitute one fifth (20 percent or 89) of the Parliament – 69 in the National Assembly and 20 in the Senate. They sponsored 53 percent (39 out of 74) private members’ bills, 27 percent (27 out of 100) resolutions, 47 percent (51 out of 108) Calling Attention Notices, and 32 percent (561 out of 1772) questions in both Houses of the Parliament. Moreover, they also initiated 40 percent (four out of 10) proposals for amendments to the parliamentary rules of procedure and 39 percent (41 out of 104) motions for debate on issues of public importance. They initiated around 30 percent of the parliamentary interventions singly or in partnership with other women while also partnered an additional three percent business with their male colleagues.

On an average, each female lawmaker in the National Assembly sponsored eight agenda items in comparison to three items by each male lawmaker. However, in the Senate, they sponsored seven agenda items as compared to eight items by their male colleagues. Besides agenda contribution, female lawmakers also actively participated in the debates on scheduled business and in raising Points of Order and Matters of Public Importance. Around 62 percent female lawmakers – 46 percent of female MNAs and 90 percent of female Senators – contributed to the discussions and debates during the parliamentary proceedings.

An analysis of the official attendance records of the National Assembly and the Senate illustrates that female lawmakers are more regular in attendance than their male colleagues. On an average, each female Member of the National Assembly (MNA) attended 83 percent of the Lower House sittings while each Senator attended 64 percent of the Senate sittings. The male MNAs and male Senators attended 70 percent and 57 percent sittings of their respective House. Similarly, each NA sitting witnessed around 70 percent of the female MNAs in attendance as compared to 60 percent male MNAs. In the Upper House, each sitting had 83 percent female senators and 71 percent male senators present in the House.