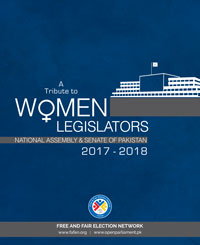 ISLAMABAD, March 7, 2018: In collaboration with their male counterparts, women lawmakers contributed 39% of parliamentary business in the National Assembly and Senate during 2017-18. Comparison of the on-floor performances of women and men lawmakers in both Houses of the Parliament shows that women members actively participated in the proceedings through regular attendance and substantive contribution to parliamentary business, particularly in the National Assembly during the reporting periods – May 2017 to February 2018 for the National Assembly and March 2017 to March 2018 for the Senate.

Currently, women constitute 20% of the Parliament with 19 seats in the Senate and 70 in the National Assembly. These women parliamentarians contributed 36% of the business transacted by both Houses of the Parliament in their respective parliamentary years. They also supported their male counterparts in sponsoring a three-percent additional agenda.

Women parliamentarians also kept a close vigil on the government by asking questions and raising Calling Attention Notices. They asked 1,595 (50%) Questions and moved 64 (86%) Calling Attention Notices (CANs) in the National Assembly. Whereas, in the Senate, the Questions and CANs moved by them amounted to 241 (16%) and 26 (25%). Moreover, they sponsored 36 (80%) Motions under Rule 259 in the National Assembly and 48 (42%) Motions under Rule 218 in the Senate.